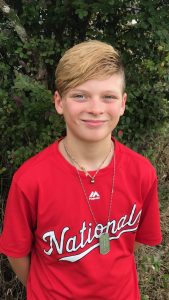 Sticking with their mission of supporting our local young musicians, opening the festival this year will be Mason Cheatham. Mason is a 10 year old student from Mayfield Elementary who fell in love with music by accident. He does not have a specific genre that he specifically idolizes as he prefers to appreciate the beauty in all sounds – finding inspiration in the variety. Currently, Mason’s favorite bands are Maroon 5 and Imagine Dragons. His favorite song is Sounds of Silence originally sung by Simon and Garfunkel and most recently re-done by Disturbed.

At such a young age, Mason has a deep appreciation and love for his country and for the Star Spangled Banner. He fell in love with the National Anthem after hearing it LIVE for the first time while attending a Baby Cakes game in New Orleans with his family. The patriotism of this song brought Mason to tears and he has since fallen in love with all renditions of the of the song and truly enjoys singing it for others. Mason is currently studying music and is learning to play the saxophone with his school band. When asked what he loves about music, Mason simply says “I like the way it makes me feel.” 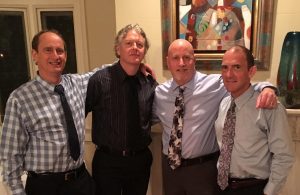 Led by pianist Mike Rihner, the Rhino Electric Band will wow you with their dynamic sounds of contemporary and smooth jazz music. Mike is an accomplished jazz artist who has performed at music festivals around the country including the New Orleans Jazz & Heritage Festival as well as a studio musician. He has composed, performed, and produced several original compact discs of his own modern jazz works, performing several times with his fusion jazz group “Rhino” at the New Orleans Jazz & Heritage Festival as well as many other notable local music venues.He has also composed several full-scale orchestral suites and symphonic works, including the “New Orleans Suite” which was performed at the world-famous Carnegie Hall in 2009. He teaches in the NOCCA Music Department and is the Composition Professor at the University of New Orleans.

Mike, along with friends, who are also accomplished musicians in their right, will mesmerize you, excite you, and most importantly entertain you. 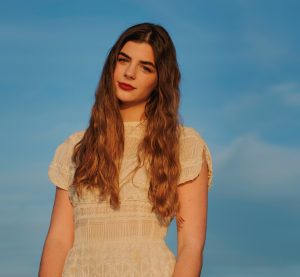 Grace Marie Russell is a 17-year-old singer-songwriter from Mandeville, Louisiana with over 30 original songs under her belt.  She began her music journey playing the piano at age of 7 that quickly grew into songwriting at the tender age of 9.

Described as a sensitive old soul, Grace writes in great depth well beyond her years. Writing has always been a creative outlet for her. When words alone don’t seem to describe what she is feeling, music is her go-to. Her music is heartfelt and gut wrenching at times, and often leaves listeners wondering where the inspiration comes from. Her happy place is sitting in front of the piano which is her oldest and most trusted confidant; truly a best friend.  Writing music is a large piece of her identity; a piece of her heart and soul to share with all.

Grace is a lead singer in the St. Timothy’s Methodist Church Praise Band, which allows her to combine her two loves: worship and music. Grace attended the Tipitina’s Internship Program (TIP) as well as the New Orleans Heritage School of Music by the New Orleans Jazz and Heritage Foundation. She has been a student in St. Tammany Parish School’s talented music program for the last 8 years and studies piano and guitar.  Grace will continue to pursue her dreams as a singer- songwriting in Nashville next year where she will go to college.

Grace believes that music truly is healing for the soul and can help mend hearts.  Her dream is for her music to help people and bring them together.  We invite you to enjoy a few of Grace’s songs by visiting GraceRussellmusic on Spotify, Facebook and Instagram. 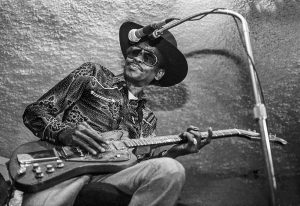 Clarence “Gatemouth” Brown (April 18, 1924 – September 10, 2005) was an American musician from Louisiana and Texas. He is best known for his work as a blues musician, but embraced other styles of music, having “spent his career fighting purism by synthesizing old blues, country, jazz, Cajun music and R&B styles” His work also encompasses rock and roll, rock music, folk, electric blues, and Texas blues.

Celebrating 5 years of jazz and blues on the beautiful Bayou Bonfouca, the Slidell Jazz and Blues Festival organizers are planning once again, to showcase the area’s finest jazz and blues musicians with a stellar lineup and another meaningful moment: a presentation posthumously honoring the late Slidell musician Clarence “Gatemouth” Brown, who was known to buck musical traditions and stereotypes for nearly 60 years. He was an acclaimed multi-instrumentalist, playing guitar, fiddle, drums, harmonica, viola, and mandolin, and accompanied by everything from small ensembles to large multi-piece bands, Gatemouth recorded 30 albums that defied neat genre labels. He blended rhythm and blues, big band swing, Cajun, jazz, rock ‘n’ roll, and country, among other styles into what he called his “American” music. His 1982 Grammy for the album Alright Again! was just one highlight in a long and varied musical career.

In September 2004, Brown was diagnosed with lung cancer. Already suffering from emphysema and heart disease, he and his doctors decided to forgo treatment. This greatly affected his musical career. Later his home in Slidell, Louisiana was destroyed by Hurricane Katrina in 2005, and he was evacuated to his childhood home town of Orange, Texas, where he died on September 10, 2005 at the apartment of a niece, at the age of 81. Brown is buried in the Hollywood Cemetery in Orange, Texas. However, flooding caused by Hurricane Ike in September 2008 damaged his grave. His grave has since been refurbished and through donations a very impressive headstone has been erected in his honor. 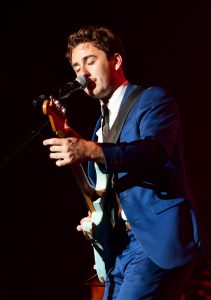 Hailing from Nashville, Paul Childers is trying to challenge everything you thought you know about the future of music. Paul finds a way to blur the lines between various music genres. The likes of Blues & Jazz and their knack for improvisation are assumed to be left behind in this era; left to be the music reserved for our fathers and artists found only in black and white photos. This however is not the case for Paul Childers. The tone and the tenacity are in the hands and the hearts of the players. Between a guitar, bass, piano, and drum set, there is nothing for the musicians to hide behind.

Describing Paul Childers isn’t easy. It’s something you have to see for yourself. The look is sleek and music is even sleeker. Come out for a treat! 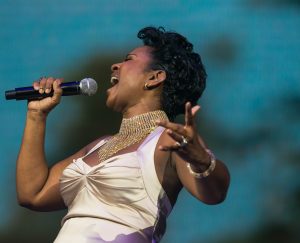 No stranger to music stages in New Orleans and around the world, Stephanie has performed for audiences big and small, from the Pope to the President, and previously here at the SJBF. Again returning to illuminate the stage and share her gift of music. Stephanie Jordan’s current show continues her trademark of singing jazz standards from the Big Band era, including highlights from the “Stephanie Jordan Sings a Tribute to Lena Horne” CD which honors the legendary Grammy Award winner and film star.

Stephanie Jordan, whom critics have placed in the company of Diana Krall and Dianne Reeves, began to receive noted prominence following the national televised Jazz at Lincoln Center Higher Ground Hurricane Relief Benefit Concert for victims of Hurricane Katrina.  “On that memorable night; none sang with greater authority or emotional resonance than Stephanie Jordan, who enthralled the packed house and a national PBS NPR audience of millions with an ascendant reading of “Here’s to Life.” Just as she had ten years ago at Jazz at Lincoln Center, Stephanie Jordan helped frame the moment of the evening at “The Power of Community: Katrina 10 Commemoration” on August 29, 2015 at the Smoothie King Center in New Orleans.  Jordan said “I am honored to have been asked by Mayor Landrieu to sing the classic tune “Home” from the Broadway musical “The Wiz” during the commemoration”

Jordan is the 5th performer to emerge from a family of New Orleans bred musicians. As the daughter of saxophonist Edward “Kidd” Jordan, Stephanie’s musical roots run deep; siblings include flutist Kent, trumpeter Marlon, and classical violinist Rachel Jordan. A graduate of Howard University, Stephanie is also a certified fitness instructor and creator of Jazz Pilates. And Jordan is Choir Director and Vocal Instructor at a local elementary school. 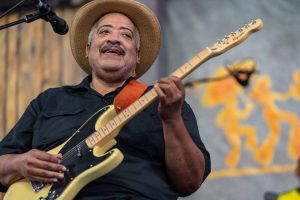 Guitarist, singer, and songwriter Mem Shannon is one of young lions of blues who believes in expanding the parameters of the music. Shannon brilliantly combines elements of funk, jazz, and rock & roll into his guitar playing, and his soulful vocals are not your run-of-the-mill stylings. In fact, most things about Shannon are exceptional: the way he writes songs, the way he sings them, and the way he presents them. He’s a rock & roll kid who played in a variety of cover bands in high school in his native New Orleans, but he always had a healthy appreciation for blues and gospel music.

Shannon was born in New Orleans and began playing clarinet at age nine. By the time he was 15, he was playing guitar, inspired by his father’s blues record collection, but it wasn’t until he saw B.B. King that he got serious about it and began practicing in earnest. In 1991, he spotted an ad in the local newspaper advertising a talent contest. Shannon and the Membership won the contest, ensuring them a spot at the New Orleans Jazz and Heritage Festival, plus $1,000 and a television commercial. Later in 1991, Shannon and the Membership went to the Long Beach Blues Festival’s talent contest but lost out in the finals.

In October 1995, Shannon’s debut, A Cab Driver’s Blues, was released. The album drew critical praise from far and wide, but it also got him an extraordinary amount of publicity. Because of the interesting nature of the recording, which includes snippets of conversation with passengers from his cab interspersed with the music, Shannon’s story attracted the attention of producers at PBS-TV, CBS-TV’s Sunday Morning, and editors at the New York Times.

By April of 1996, at the annual New Orleans Jazz and Heritage Festival, Shannon announced from the stage that he was giving up his job as a cab driver to play blues full-time. He didn’t look back, and thanks to good booking agents and his own work ethic, he continues to tour extensively around the U.S., Europe, and Canada.